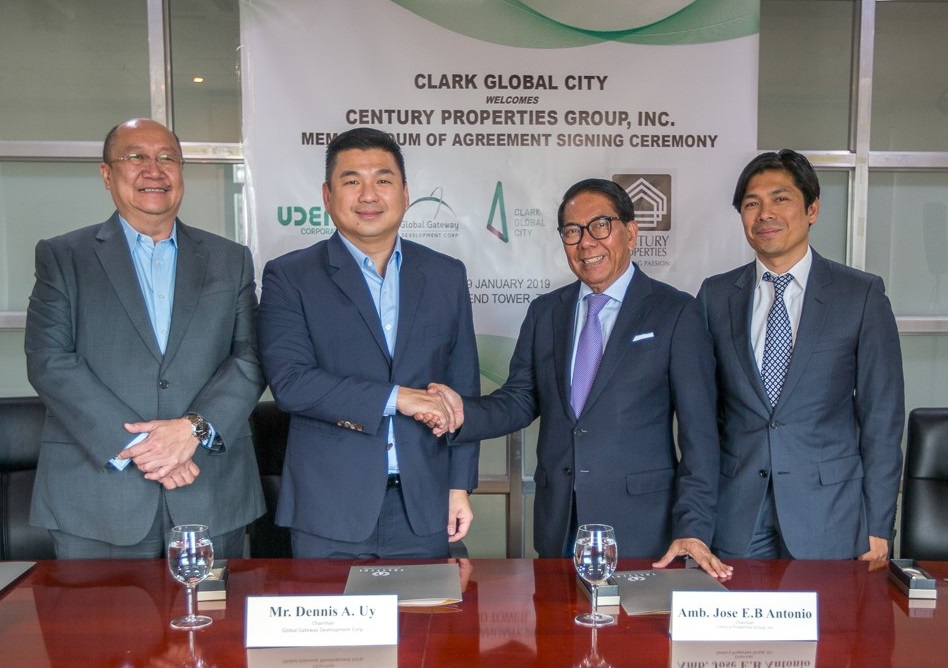 Global Gateway Development Corp. (GGDC) and Century Properties Group, Inc. signed a memorandum of agreement on January 9, 2019 to create a Joint Venture (JV) that will develop 2.6 hectares of the 177-hectare Clark Global City into a mix of residential and office buildings. In the photo are (left to right) GGDC Vice-Chairman and President Wilfredo A. Placino; GGDC Chairman Dennis A. Uy; Century Properties Executive Chairman of the Board  Amb. Jose E.B. Antonio; and Century Properties President and Chief Executive Officer Jose Marco R. Antonio.

On January 9, the two companies signed a memorandum of agreement for the creation of a joint venture that will develop 2.6 hectares of the 177-hectare leasehold within the Clark Freeport Zone in Mabalacat, Pampanga.

“We are delighted to welcome Century Properties as another key partner in developing the country’s new center of business, life and innovation,” GGDC Chairman Dennis A. Uy said.

“This is in line with our strategy to fast-track the development of Clark Global City. By joining forces with the country’s leading local developers, we can sooner unlock the potential of Clark Global City, expand our economy’s capacity, nurture businesses and generate more employment opportunities.”

The joint venture will develop a mix of residential and office buildings with support retail establishments. It will represent Century Properties’ first development in Clark, a former military base currently being transformed into the country’s next big metropolis and primed as the answer to Metro Manila’s congestion.

“We are proud of this joint-venture partnership with GGDC and we look forward to sharing our expertise from 33 years in the real estate business and bringing our experience from past successes to this project,” Century Properties Executive Chairman of the Board Jose E.B. Antonio said.

“Century Properties is one with GGDC’s vision of building a green and efficient model city in the North. Our new project together will certainly make a great addition to Clark Global City’s iconic master plan. We are very optimistic about the growth of Clark as the country’s premiere aerotropolis and we hope this is only the first of a series of projects.”

The real estate company is banking on the phenomenal growth of Central Luzon, which has the highest number of occupied housing units; and also Clark, which has emerged as the second largest market for office after Metro Manila.

“We believe in the vision for Clark Global City as the premiere address in the North,” Century Properties President and Chief Executive Officer Marco R. Antonio said. “As massive infrastructure projects are underway to make Clark connected and highly accessible, Century Properties wishes to ride on this growth momentum by serving the real demand in the office and residential markets.”

Clark Global City was previously envisioned as an aviation-focused logistics park exclusively developed by GGDC. When the Udenna Group took over in 2017, it renewed its lease agreement over the estate to run until 2085 and amended the master plan with a vision of developing the area as the next Central Business District – maximizing allowable building heights and floor area ratios, opening additional access points, right-sizing the lot cuts to the needs of the market, and welcoming local partners in developing the leasehold.

The development has since received strong interest from locators. In its Real Estate Market Insights for December 2018, Leechiu Property Consultants cited Clark Global City as the most in-demand development outside Metro Manila, having accounted for a majority of the 156,000 square meters of office demand in Clark.

Situated within the Clark Freeport Zone, the development offers an ideal regulatory, economic and operating environment. It is also poised to benefit from various public infrastructure projects such as the expansion of the Clark International Airport, NLEX-SLEX Connector Road, Subic-Clark Cargo Railway and PNR North Railway

“Clark Global City leads as a business center of excellence because it is a model transportation-oriented development in the Philippines,” Mr. M. Antonio said. “Its sustainable and disaster-ready design addresses issues of future congestion and ensures productivity and quality of life for its citizens. Overall, it is a complete city that is accessible, connected, and future-ready.” #

Global Gateway Development Corp. is the owner and developer of Clark Global City. It is a wholly owned subsidiary of Udenna Development (UDEVCO) Corp., the real estate and property development arm of one of the fastest-growing holding companies in the Philippines — Udenna Corporation.

Incorporated on March 19, 2002, Udenna is at the helm of the diversified business interests of the Udenna Group in petroleum and oil through Phoenix Petroleum; shipping and logistics through Chelsea Logistics; real estate through Udenna Development; education through Enderun Colleges; and infrastructure through Udenna Infrastructure, among others.

The Udenna Group has exponentially grown for over 15 years. It successfully listed Phoenix Petroleum Philippines, Inc. and Chelsea Logistics Holdings Corp. on the Philippine Stock Exchange in 2007 and 2017, respectively.

One of the Philippines’ leading real estate companies, Century Properties Group is known for its innovative real estate projects and property management business.  For 33 years it has delivered life-enhancing concepts through its various platforms: from in-city upscale vertical developments and affordable housing to its leisure, tourism and commercial properties. By focusing on future-ready communities and brand associations that provide a better quality of life, Century Properties has positioned itself as a forward-thinking catalyst of urban change.

Century Properties also launched the 142-hectare Batulao Artscapes, the World’s First Livable Art Park, in Nasugbu, Batangas as its first residential tourism development; and PHirst Park Homes, Inc., its affordable housing brand in a joint venture partnership with Mitsubishi Corporation. Additionally, Century is ramping up its for-lease properties, starting with the completion and opening of the Asian Century Center in Bonifacio Global City in 2018, and Century Diamond Tower in Century City, which is scheduled for completion in 2019.